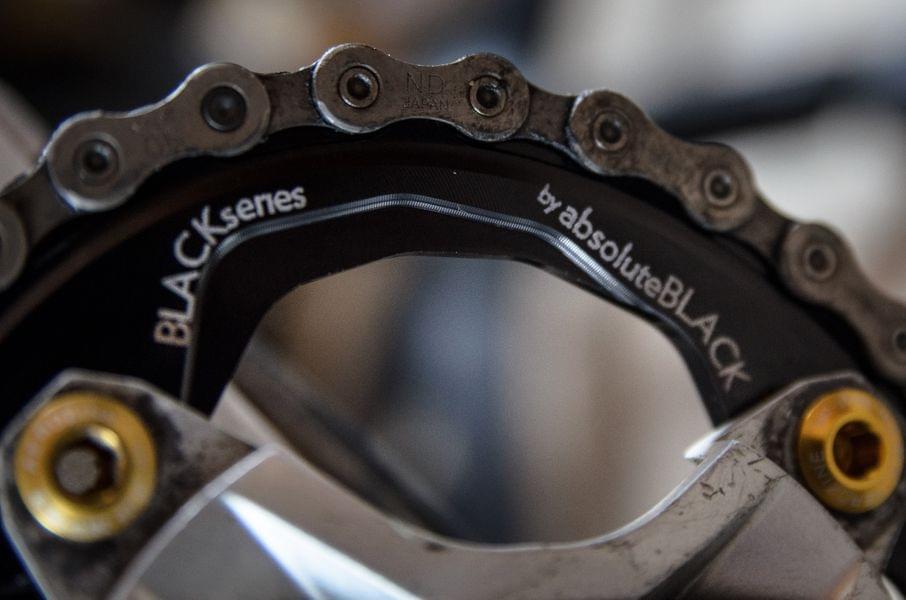 Having chosen to go for a 1x10 drive train on my bike build I have been looking for the most efficient gear ratios.

In the process I came across the concept of oval chainrings. It’s an idea that intrigued me. Then, helping a friend convert their bike to a single front ring, I traded my 34 tooth to them in exchange for a new Absolute Black Oval Chainring. I chose the 104/64bcd version to fit my Shimano XT cranks, but there are versions for practically every crank type.

Absolute Black recommend their 34 tooth for any one currently using a 33 or 34 tooth ring, so that’s what I went with.</p><p>Installation is very easy, no different to fitting any other chainring, although you do have to make sure the arrow mark machined into the ring is aligned correctly behind the crank. Unless using the matching bashguard, also available from Absolute Black, you will need to use single ring sized bolts, shorter than the bolts from your 3x or 2x setup.

Absolute Black say on their website that the oval ring “Greatly improves traction and climbing abilities”, “You will ride faster using ovals” and “You will not ‘feel’ the oval shape at all”.

For clarity, I have only been on one proper off road ride of about 2 hours with this ring installed (in addition to a couple of short loops on the road), so my experiences are somewhat limited.</p><p>Starting with the ‘feel’, that statement is absolutely correct in my experience. I didn’t notice anything different while pedalling. Having read some other reviews online of oval rings I know some people say they feel a little odd to start with and require some getting used to. I didn’t notice any of this. The oval ring felt exactly the same as my old single circular chainring.

“You will ride faster”. According to Absolute Black, the 34t is equivalent to a 32/36t ring. That is, it feels like a 32t ring in the least powerful part of your stroke, so less resistance than a regular 34t. And then behaves like a 36 tooth ring through the power part of your cycle. In theory then, as I read it, this should give you similar speeds to using a 36t chainring, without the associated drag when in lower gears. I haven’t tried it on a flat out pedally section to confirm that yet. It certainly didn’t feel like a 36 tooth ring while climbing though.

Which brings me to the traction and climbing. As I said I can only base my observation on one ride. However, that one ride was immediately following storm Eve, and the trails and fire roads we were riding were either incredibly muddy or literally flowing with water, neither of which promote traction. Obviously the ring has no effect when going downhill, your grip and traction there mainly depend on tyre choice. However on the up hills I can honestly say that I didn’t spin out once. Additionally, I managed to climb a couple of very steep sections that I may have struggled to climb previously. One of those sections I later attempted to climb on a friends bike running a normal 34t ring when we swapped for a few minutes (you have to compare right, whose bike is lighter, faster, better) and I didn’t make it to the top. All of this is of course somewhat circumstantial, I didn’t have two identical bikes to test two different rings on for a direct comparison, my friends bike is similar in weight but runs different rear cassette, wheels and tyres.

Together with my Shimano Shadow+ rear derailleur I haven’t dropped the chain once. And although but one ride, it was over some rocky fire roads and in parts very rooted single track.

No conclusive results so far based on a single outing. But some encouraging observations. The one thing I can say for certain is that they are certainly no worse than my previous traditional circular chainring. That, together with a general feeling they were helping me climb better, does not make me regret fitting the oval chainring. I’ll need to try it over a longer period across more varied terrain to get more definite conclusions, but I’m very willing to give it that extra time.

A follow up article will be posted at a later date with my long term experiences.

Below are a few extracts from Abolute Black’s own website regarding the thinking behind oval chainrings:

Why our oval chainrings work

Our traction Oval chainrings work because a rider does not produce power evenly through a pedal stroke; they maximize the part of the stroke where power is produced and minimize resistance where it isn’t. Oval rings make the spin cycle a lot smoother and are easier on legs while climbing. Believe it (or not), but a round chainring doesn’t transfer torque to your rear wheel as smoothly as an Oval one. You will actually feel your stroke to be more “round” with an Oval shape than with a round chainring.

Traction, Traction and Traction. With oval rings rear tire traction improves greatly on loose and slippery terrain. Smoother power delivery to your rear wheel means that you will be able to maintain better, constant cadence; get less stress on the joints (knees) and therefore be able to keep certain level of effort for longer. This results in higher average speed. Moreover, 11 studies made by various Universities in the World show that using oval chainrings human legs utilize more muscle groups (compared to round one), but each of them to lesser degree. Load from pedaling an oval chainring is spread over greater muscle mass which in effect gives you the feeling of fresher and more relaxed legs. It is world’s finest oval chainring backed by tens of thousands of customers.

Please leave your comments below if you have experienced this or any other oval chain ring. And likewise if you have any questions.