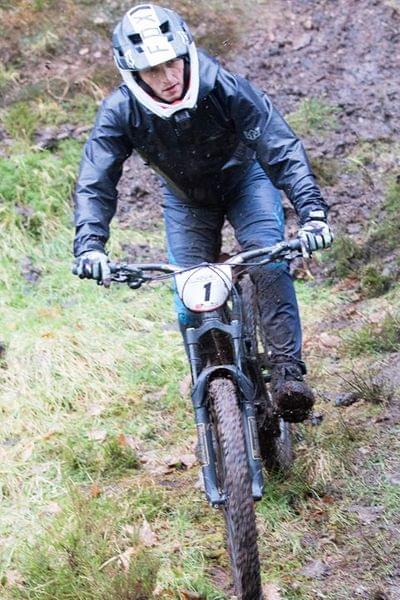 When Team Ballyhoura announced back in January that they were going to be organising a brand new team enduro race, social media was buzzing with excitement.

Based on the multi-day Enduro2 event held in the Alps, 2NDURO was going to be something completely new for Irish mountain bikers. The fact that the organisers managed to sell all 100 team places with weeks to spare before the race is testimony to just how well it was received. I was fortunate enough to have gotten an entry.

Roll on March the 3rd. After just over an hours drive I found my way to the Ballinaboola Forst Recreation area in County Limerick, a few miles up the road from Ballyhoura MTB Trail Centre. The weather forecast was not brilliant for the day, with heavy rain forecast. But that didn’t dampen the spirits of the 89 pairs that turned up on Sunday morning. I met up with my teammate and one other team from Tralee Bay MTB as we queued at the registration tent in a cold drizzle.

Sign on went smoothly, and after unpacking the bike and getting all my drinks and snacks loaded into my various pockets we went and queue at the bike check tent waiting for them to let us start up the forty-minute climb to the start of the first stage.

Apart from a few sections of trail centre and one section of trail that was used at the Gravity Enduro event last year, all the stages were new to me.

The rules of team-based enduro were simple: each team was given one timing chip. At the start of each stage, both riders would start together at the same time. And the clock couldn’t be stopped until both teammates were inside the stage finishing gazebo. 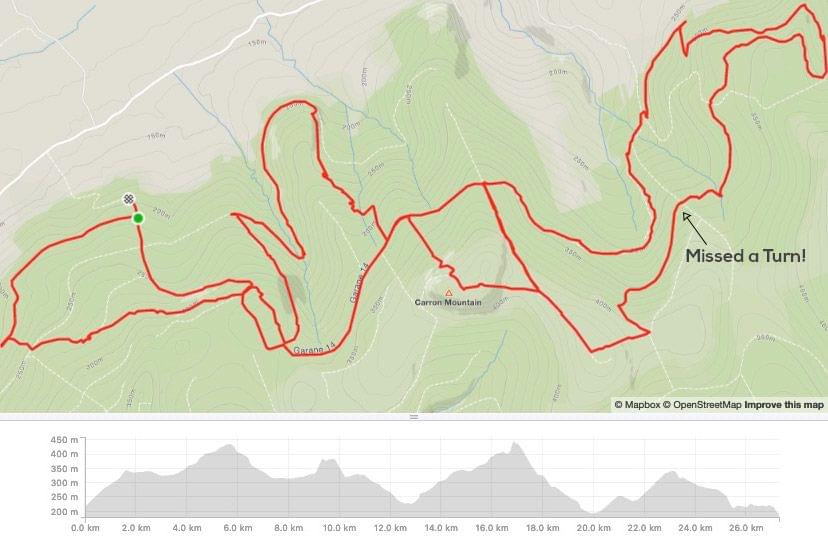 Towards the top of the climb to stage 1, the rain began to turn to sleet and the temperature dropped considerably. Undeterred we lined up ready to take our turn at the start. The stage started off with a short sprint and down a rocky descent for a couple of hundred meters. Turning sharply left we navigated the first of several all-natural sections of trail that quickly turned very muddy. I was glad we were quite close to the front of the queue as I suspect teams further back may have suffered a lot more with the slippy conditions on the steeper sections.

Unfortunately, things didn’t quite go to plan from this point for our team. After a short sprint along some official single track, we almost missed a right turn on the stage which cost us a good thirty seconds. And further down the stage, both of us continued straight on, missing a turn without realising but instead following the trail centre route for an extra seven kilometres and getting separated before finding our way back to the stage finish. At this stage, the sleet was starting to fall lower down the hill, and after standing around for close to thirty minutes before being reunited with my teammate I was thoroughly cold. Needless to say, we finished a long way down the time tables for this stage, 84th out of 89 teams. We weren’t the only riders to have missed this turn as my teammate returned with a group of several riders that had all got lost.

The climb to the top of stage 2 wasn’t excessively long, but the wet and cold was getting to many riders at this point with a lot of complaints of numb feet and lack of feeling in fingers making braking and gear changes difficult. The start of the second stage followed a small gulley, which by this stage was flowing with water, but was great fun to ride with the banks making for natural berms. You just had to take care not to catch a pedal. Further down the trail straightened out, but also became ankle deep in thick mud. It was a case of avoiding the brakes where possible and keeping the wheels pointing downhill. Further down the stage joined up with one of the Ballyhoura Tech trails with plenty of rollers and a few berms. Both of us managed to finish this stage following the intended route and finished 49th overall on stage 2.

Unfortunately, with the cold and the still worsening weather my teammate was now suffering from extremely numb feet and leg cramps and as a result, decided to call it a day. While that meant as a team we wouldn’t officially finish the race, with our disastrous first stage it really didn’t make much of a difference. However, out of curiosity, I decided to carry on and complete the final stage on my own.

It was a bit of a slog to the start of stage three, as the previous stage had brought us a long way down the hill. In the queue for the stage start, I overheard quite a few people saying that they were in the same boat as myself by this point, with teammates having retired due to the weather, the cold, mechanicals or a combination of these.

The start of the last stage followed a section of trail marked as Pump and Grind on Strava. And a grind it was being relatively flat and very muddy making it hard work to try and carry any speed. This was followed by over a kilometre and a half of trail centre single track. By now, however, rain and sleet had turned to proper snow. While early on the stage it was just a nuisance to see through, after a few hundred meters the snow began to settle. Now, if your front wheel wandered off the middle line at all you were skating on mud and snow with almost no grip making for slow going. Due to the changing conditions, I think that any teams unfortunate enough to tackle this last stage so late in the day had almost no chance of placing well in the overall results. The final 200 meters dipped into a tight forested section with deep mud, slippy turns and rooty drops - all of which added up to a lot of fun and a great conclusion to the race.

I think the weather played a huge part in the inaugural 2NDURO. Very few if any of the riders were prepared for the snow and for how cold it was. I saw racers in shorts and jerseys and I know many quit after the first two stages. By the time I made my way back to the car park the cars there were covered by a couple of inches of snow.

Sadly, the weather was not kind to my GoPro and most of the footage has to be watched through a window of mud and running water. I’m including a couple of short clips just to give you an idea of what the conditions were like by the end of race.

Despite the memorable conditions, in my opinion, the 2NDURO was a roaring success. The format was something new and novel. The team-based racing style made for great atmosphere and camaraderie. And all the stages were long, varied and great fun. Bring on 2020 and let’s do it all again - but maybe the organisers could order some sunshine next time!

Cahir Media have a great gallery of photos taken during the race, available here.