Tires. There is such a huge selection. Every rider has their own set of tires that they swear by. The magazines are filled with head to head comparisons full of tech speak and rubber compounds. Get the wrong ones and your bike can feel like it’s on melted butter, or have so much grip it feels like you’re pushing a 2-tonne 4x4 uphill.

Earlier this year we shared the tire choices of twelve different mountain bike riders from different parts of Ireland. And while there was some variety in the tires chosen, what was blazingly obvious is that big name brands control the market. Whether that is because they are that much better, or because we are influenced by the tires that we see on new bikes in the shop, online or in magazines is debatable. However, based on the dominance of leading labels in that article someone on social media asked if I had tried any of the VeeTire range.

Never one to turn down a challenge and eager to try something new, I soon arranged to have some VeeTire Flow Snap tires sent over. Based on my description of the trails I ride, this was the tire recommended by Geoff at VeeTire UK for both the front and rear wheels.

I received two Flow Snap Enduro Core 2.35” tires. They use a dual Tackee compound. The Flow Snap is also available in a Gravity Casing and 2.6” plus size. On the VeeTire website, they are described as a tyre “that’s capable of handling anything in its path” and “with massive grip and traction yet still rolls quickly”. 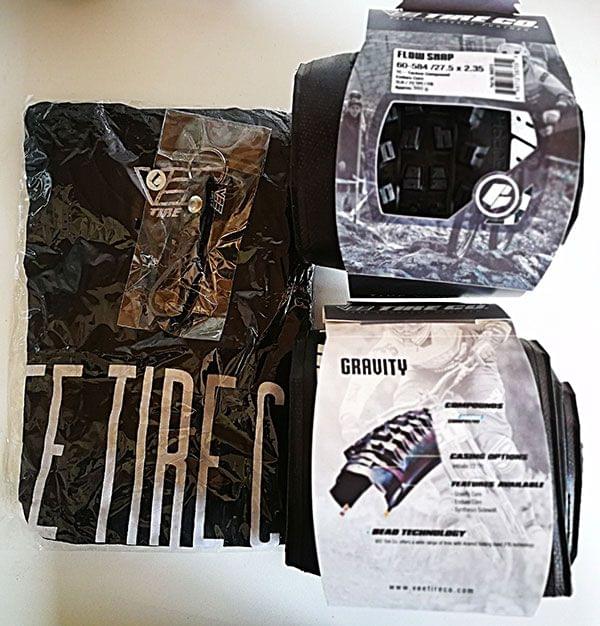 Unpacking them the aggressive knobs stood out immediately. This is a not a tyre made for gravelled trail centre riding. While I am all for aggressive mud clearing tyres on the front wheel, I have generally run a much mellower and faster rolling tyre on the rear wheel trading rear grip for uphill speed. As a result, I was a little dubious about running such chunky tyres on both ends of my bike.

Installing them they were a cinch to set up tubeless. They popped on to my rims relatively easily without needing to resort to tyre levers, unlike some other tyres I’ve used in the past. The sidewalls seated on the first try using my Tire Booster and a little bit of soapy water. With a couple of syringes worth of tubeless tyre sealant per wheel, they have not needed to be pumped up since they were installed.

For the first couple of rides, I chose to use the Flow only on the front wheel. One of those rides was the 2NDURO race at Ballyhoura. If you haven’t read how I got on there, you can catch up here. In short, it was the weekend that Met Éireann were caught completely by surprise and what was forecast to be a wet Sunday turned into a 0-degree snow fest. Extreme conditions for most tyres. The Flow Snap seriously impressed me though, maintaining grip on the slick muddy and snowy trails, only struggling in the deepest mud holes and even then I was able to remain in control. After that, I didn’t wait very long to fit the other tyre to the rear wheel.

I need not have worried about the tyres rolling too slowly on the climbs, over the last couple of months I’ve been consistently setting personal best’s on the climbs at my local trails. While I won’t attribute the PRs to the tyres directly - I have been doing a good amount of training over the winter (follow my updates on the 12 Week MTB Fitness Plan) - having the Flow Snap on my rear wheel has obviously not slowed me down significantly.

While at 2.35” wide these may not be as wide as seems to be becoming the norm on trial and enduro bikes, I think they are as wide they need to be and punch above their weight compared to other tyres. If you do prefer your tyres wider, there is also the Flow Snap + at 2.6”. In the time that I have had these tyres on my bike, I have ridden the same trails in very varied conditions, wet and muddy after a winter of rain through to dusty dry after a couple of weeks of dry sunny weather. At no point did I wish I were using different tyres.

In almost all trail conditions they have gripped perfectly and keep on inspiring confidence. Under braking, the rear tyre only starts sliding when I really grab a fist full. And the front hangs on leant over in turns far beyond the point I personally am comfortable. The only time both wheels have struggled is on one steep section of a relatively new that has not yet bedded in properly and the soaking wet topsoil has started sliding off the rock underneath. But I would be surprised if other tyres could perform any better.